You can purchase most of this fantasy art as prints, jewelry, bookmarks, Originals, Limited Edition Canvas prints and many more great products at Deanna’s Etsy Store and Zazzle Store.

Maleficent – The self proclaimed “Mistress of All Evil” 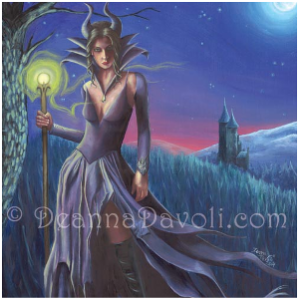 Maleficent – The self proclaimed “Mistress of All Evil” = Maleficent! One of the most recognized, feared and celebrated villain. My version of Maleficent displays a compelling, dark and sexy character. She stands on top of mountainous ledge gazing at the viewer. The moon and distant castle twinkle in the erie moonlight. Her raven sits on top of a spooky tree, lit by the green glow of her powerful staff. * Special thanks to the model faestock for the photo reference.

View all art in the 2010 to Present Art Gallery collection 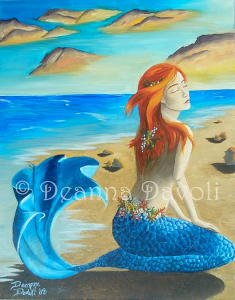 Siren Mermaid – This is the first mermaid I have ever painted. This siren of the sea basks in the warmth of the setting sun. She was loads of fun to paint and my mom adores mermaids, so I knew I would eventually create one! 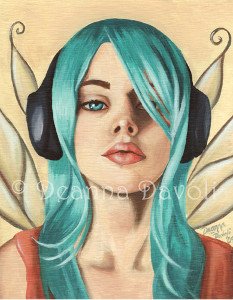 Faerie Funk #2 – Want a little funk with that faerie? Jiving to the tunes on her headphones, this fairy exudes funkiness. It is about time the fairy came out of the woods! I have created a “Faerie Funky” series of this urban fairy. She pops up on most of my products (prints, cameos, rings and more!). 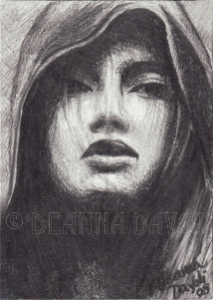 Pagan Wiccan Priestess – This image was inspired by the mystery & allure of the power of ancient female religious priestess. She embodies the spirit of the Pagan & Wiccan religion. She captivates so many people who view her.

Dark September Vampire Art Print – This Gothic beauty is a striking vampire. She sheds a tear of blood while standing in the dark forest. She elegantly wears a classic gothic corset, skirt and fan. She would complete the walls of any Vampyre lovers home. 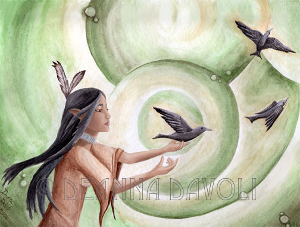 The Messengers – In many Native American Tribes, the raven is the symbol of a messenger. My friend’s story was the inspiration for this piece. She lost her soul mate for about 10 years. They did not break up on bad terms, so she would often think about him. She told me that when she would think about him she would send him messages (what messages, I don’t know). She visualized the messages being sent by ravens. FYI: The Ho-Chunk Tribe & the Miwok Tribe are both tribes that believe the raven is an optimistic messenger. I used their mythology/belief as my guide. 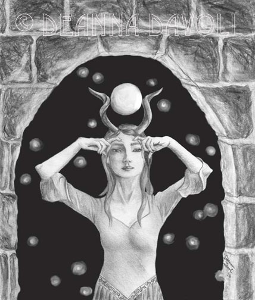 Isis – The Egyptian moon Goddess Isis, the mother & giver of life is adorned on this keyring. She is surrounded by stars & a stone structure. The moon rests between her horns as she gazes at the viewer.

Deanna Davoli is a full time, self representing artist. Art has been my passion in life! I have always enjoyed creating imagery that walks the line of reality, with a touch of Gothic couture. I was born in a small town…read more

You have Successfully Subscribed!